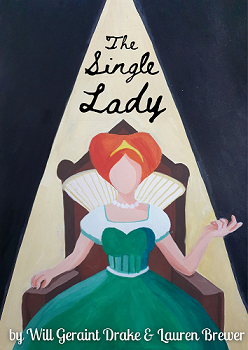 A brand-new, student-written musical focusing on the infamous love triangle between Elizabeth I, her cousin Lettice Knollys and Robert Dudley.

As the daughter of Anne Boleyn, Elizabeth knows how much love can go wrong, but when she is seduced by courtier Dudley, History asks her one question: how far must a woman go to win at a man's game? Written by Will Geraint Drake and Lauren Brewer, 'The Single Lady' offers a glimpse into the sacrifice and personal cost to be a female leader in a man's world. Perhaps the “Virgin Queen” really isn’t all she seems in the history books...

If you are a Durham University student attending please note that you must attend with proof of a negative DU covid test within the past 48 hours.

And Then There Were None 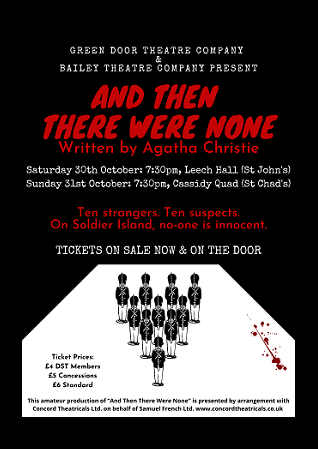 Ten strangers are summoned to a remote island. When one of the party dies suddenly, they realise they may be harbouring a murderer among their number...

All that the guests have in common is a wicked past they're unwilling to reveal and a secret that will seal their fate. For each has been marked for murder. As the weather turns and the group is cut off from the mainland, the bloodbath begins and one by one they are brutally murdered in accordance with the lines of a sinister nursery rhyme.

This production is presented by Green Door TC & Bailey TC, will have an interval of 15 mintutes and will take place Live as follows: