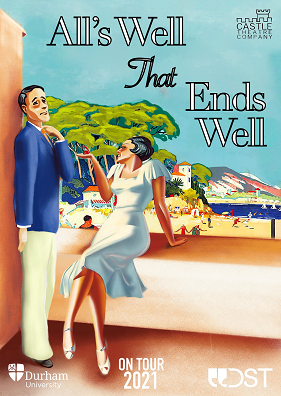 Castle Theatre Company presents one of Shakespeare’s most charming comedies! A fairy-tale story of true love finding a way, featuring colourful characters and set in 1930s French Riviera, this is the tale of a heroine who fights to secure her own happy ending.

Low-born Helena is madly in love with the noble Count Bertram, but he won’t take a second look at her. When she saves the King of France’s life, he offers Helena anything she desires in return – she asks for Bertram’s hand in marriage. Horrified, Bertram flees to fight in the war, and refuses to love Helena until she can take the ring from his finger. Meanwhile, Bertram’s boastful friend Parolles is tricked by his fellow soldiers, who have had enough of his behaviour. Can Helena fulfil Bertram’s demands and persuade him to love her after all? For over three decades, Castle Theatre Company has taken its annual summer Shakespeare tour around the south of England, performing classic comedies on the lawns of stately homes, gardens and abbeys. Renowned for its high standard of performance, Castle Theatre Company promises fantastic entertainment for audiences of all ages. Bring a picnic and enjoy an afternoon of riotous Shakespearean fun!