Bella in the Wych Elm/ Recorded 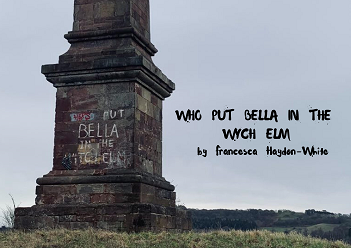 After the skeletonised remains of a woman are found stuffed into the trunk of a wych elm in Hagley Woods, graffiti begins to appear and gruesome theories begin to take form. We delve into the mind of a detective exploring the case but as they begin to lose control of the story we are left wondering not just Who put Bella in the Wych Elm but if we should be telling the story at all…

The unsolved murder known as ‘Who Put Bella in the Wych Elm?’ details the finding of the skeletonised remains of a woman found stuffed in a wych elm in a town near Birmingham. Soon after the body was found graffiti appeared around Birmingham asking ‘who put Bella in the wych elm?’ and many theories emerged about who the woman had been and how she had died. Her murder and identity remains unsolved today. The show follows a ‘detective’ who is presenting to an audience the story of the unsolved murder. She brings the stories and theories to life by animating figures and manipulating the show. However, as she digs further and become more adamant to reveal what truly happened the story begins get away from her leading us to question whether we should even be telling the story at all.

This is a Pre-recorded Online Performance

Once you have purchased a ticket you will receive a booking confirmation containing the link to access the show. Regardless of which performance date you choose, the stream will be available to you 24 hours a day from June 4th at 7:30pm until midnight on June 11th.